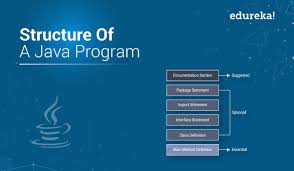 In any language we need to follow specific structure to write the program. A java program structure divided into various sections. Some of them are mandatory and some are optional. A java program contain many classes of which only one class is defines a main method. Classes contain data members and some methods that operate on the data member of the class. the method contain data type declarations and executable statements. To write java program, Firstly we need to define the class and put them together.

The documentation section comprises a set of comment line that improve the readability of the program. A comment is a non-executable statement that helps to read and understand a program, as well as explain why and what of classes and how of algorithms . A good program should include comments that give us some information like name of program and author of program etc.

Three type of comments as below.

Single line Comment: Start with a double slash symbol(//) and terminate at the end of the same line. For Example

Multiline comment: It start with /* and ends with */ .For example

The first statement of the source code file is package . It tells the compiler that classes defined in the file belong to this package and also provides a package declaration. this statement is optional .It must appear in the java file before any declaration of class.

In the above statement, declare that all the classes and interfaces defined in the java file are the part of student.

Here, Student is the name of the package and SName is the class which we want to access, and we also can access the classes that are part of other Named Package.

An interface is similar to a class but includes a group od constants and method declaration. it is an optional section and is used when we want to implement multiple inheritance in java.

This section is used to describes the information about the user-defined classes in the program. A java program may contain multiple classes definition. In every java program contain at least on class. A class is a group of data variables and methods.

This section , contain the main() method where from the program is actually starts. In the main method of the class, the objects of various classes can be created, access and manipulated.

public : The keyword public is an access specifier that declares the main method as unprotected and therefore making it accessible to all other classes.

Static: The keyword static allow main() to called before an object of the class. The main must be declared as static since the interpreter uses this method before any objects are created.

Void: The type modifier void indicate that the main() method does not return any value but simply prints some text to the screen.

4. The output line , this only contains one executable statement.

system: It is contained in the package java.lang. In java, java.lang in impoerted by default.

out: The object out represents the output steam and is a static data member os the class system.

printIn(): The printIn() is the method of out object, that takes the text string as an argument and displays it to the standard output i.e. monitor’s screen.

Write a Java program to read and display any 10 numbers

programming with java By balagurusamy