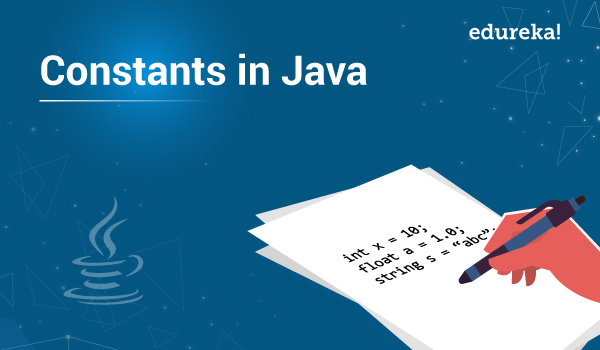 In this article, we will learn about what is constants and types of constant in java

Constant in Java refers to a fixed value that doesn’t change during the execution of a program. The value of constants appears right in a program. It is also known as Literals. We use the constants to create values that assign to variables. Constants can make our program easy to read and understood by others.

Types of Constant in java

There are several types of constant in java such as:

An integer constant refers to the sequence of digits. Without any decimal point, numbers are integers. They are the primary constant in java programming. There are three types of integers as Decimal (base 10), Octal(base 8), Hexadecimal(base 16).

1.No commas or blank spaces should not allow in an integer Constant.

2. It uses both positive or negative signs. If no sign precedes an integer constant, it is positive by default.

3. It must have decimal

4. it should have at least on digit.

They are also known as the floating-point constant. It must include a decimal point. They are also written in the floating-notation. In which the constant is impart into a mantissa and exponent. Such as 64.23f, -23.43f, 342E-3F , etc. They also can be positive or negative.

1.It should have a decimal.

2..No commas or blank spaces not accepted in a Real Constant.

3. It should have at least one digit, Which can be a positive or negative integer. The default sign is positive.

A Character Constants refer to a single Unicode character and enclosed with a pair of single quotation marks (‘ ‘).

They can include in the program by using an escape sequence.

An escape sequence refers to a character preceded by the backspace(\).

Some of the escape sequences used in java are listed below.

It refers to a sequence of any number of characters enclosed in the double quote( ” “). The character can be alphabets, digits, special characters, and blank space.

Implementation of Array class in JavaScript